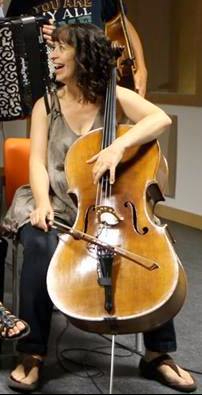 Kate Shortt was born in Stratford on Avon in 1966 and raised in the Midlands and Oxford. Her musical life began aged 4 with piano and later at 5 yrs old on cello. Having won various cello and piano composition prizes in Festivals and the Birmingham Radio (BRMB) prize for piano composition aged 14, she further developed her song writing using piano and voice. She later studied classical cello at Guildhall School of Music and Drama in addition to  jazz cello, singing and piano. Her first album, ‘Something To Tell You’ (2007) is an amalgamation of styles influenced by jazz, theatre, film and various artists from Elton John to the Beatles            https://open.spotify.com/album/5WPwLFhX5QyzU9ey8s2IWX

Kate is also a workshop leader and music tutor, having led the Hackney Borough Youth Choir for many years and is a conductor, composer and arranger for the Hackney Children’s Singing Festival for whom she has composed various songs:

‘One in a million’ for  the Olympics

As a freelance cellist in the pop world, her work has included playing on top of the pops with Tears for Fears and Take That. She has also devised parts and played with Peter Green and his Splinter Group. More recently Kate has worked with guitarist Malcolm Bruce at Shepherds Bush Empire at the Memorial concert for his late father Jack Bruce.

In the jazz world, Kate performs and records regularly with various artists, including Christine Tobin, Phil Robson, Liam Noble, Dave Whitford, John Etheridge, Orphy Robinson, Estelle Kokot, Lola Perrin, Gene Calderazzo, Penny Rimbaud and Cleveland Watkiss. She is also a member of the Northern Lights Symphony Orchestra (N.L.S.O.) and is in the Austrian trio ‘Line 3’ with composer/pianist Norbert Zehm. She is a regular band member of the Portuegese Fado singer Claudia Aurora, with whom she has toured Europe and recently recorded her new album ‘Mulher Do Norte’

Kate debuted her  solo show ‘Shortt and Sweett’  in 1991 which morphed from being a stage/theatre show with piano ballads into a ‘stand up’ comedy show, with songs and impressions at the cello and piano about daily life. She has performed regularly at the Crouch End Festival, Kings Place as part of Cello cabaret days, Brighton Festival, Edinburgh and more.    https://youtu.be/5QLBi95Gcd4